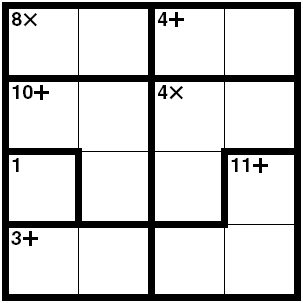 Over the March Break (when I had some unstructured down time) I ran into a new puzzle form -- the KenKen. While it has a superficial similarity to Sodoku in that the numbers can't be repeated in a column or row that's where the similarity ends. In KenKen, the large grid has been broken up into cages - highlighted areas that have to be filled in with an arithmetic expression to hit the target number written at the top of the cage. There is also an arithmetic operation at the top of each cage. So, for example, if 24 x is at the top of the cage, the cage would have to be filled with as many numbers as cells in the cage and those numbers would have to multiply to 24 (so it could be 2x3x4 or 4x6 depending on the number of cells in the cage and the restriction against repetition, of course). As an exercise in class, it's a good reinforcer of basic skills (no calculator, of course). Once my students have the hang of completing the puzzle, we're going to move on to constructing our own. As always, it's harder to create.
My only concern about KenKen is that it treats subtraction and division as commutative. That is, it treats 6-4 and 4-6 as the same answer, 2. I wish the KenKen authors would use Polish (or pre-fix) notation so that it would avoid this issue. Plus it would allow us to talk to the students about Polish notation. When I went off to university I bought my HP28 ... it was one of the first graphing calculators and, as all good HP calculators did, worked in Reverse Polish Notation. That is, when adding 2 + 3 you entered it 2 3 +. The operation would always go at the end. It means you don't have to use brackets to avoid order of operations. A great little calculator I used until I became one of the testers for the TI82. But that's a story for another day.