I felt this tingle while shoveling snow...

February 03, 2015
So we had a snow day Monday.  I won't go in to the gloriousness that a snow day is here in Canada.  Suffice it to say that they're as close to heaven as you can get without dying.
It came at a cost; there was 35cm of snow across my neighbourhood.  My neighbours are not teachers, they tend to be young families or retired folks -- so when I get a snow day, I grab my shovel and start clearing the snow from their driveways and steps.  I know how privileged I am to get the day free and not have to drive, slowly and dangerously, to work on snow-covered roads.
As I was shoveling through five different driveways, I was using my phone to play music.  I kept getting this buzz of messages coming in, though... which is unusual on a snow day.  It turned out that students, safely tucked away at home, were using Yammer (our conversation space) to ask and answer math questions unbidden by their teachers!

Now, we had great success at Christmas prior to exams as students used Yammer to post their questions to the larger group and have answers given by their colleagues and a variety of teachers.  But this was another step altogether... on what is clearly a "day off" they were building on a space, making it their own, and learning at their own pace and of their own desire.  And these are students who are separated by what could be considerable distance, say 50km at most and not planning to engage in a synchronous manner, like Skype. 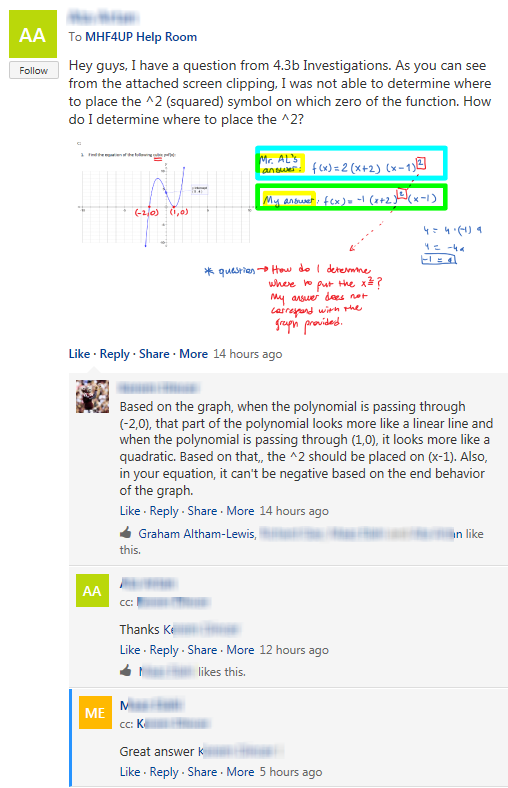 Now, Yammer messages are written in text but our students readily used OneNote and their pen-based tablets to write out their mathematics when it was convenient and post the images -- they're not limited to trying to tap out mathematical expressions.  Being able to sketch makes all the difference in the world when you're trying to learn through problem solving.
Overall, Yammer usage continues to grow -- we are making a concerted effort to move away from inefficient emails to a more elastic, searchable, shareable and analyze-able information and discussion site.  It's been great to see folks post their pictures of their pets in response to a student request and for another student to post his computer science project for any student or faculty to experiment with and offer feedback.  I love that a digital environment is lowering barriers to communications between parties -- although we're a close school family, there is still reluctance of students to talk to teachers just because they're teachers.  Yammer provides a less onerous way to talk that doesn't exist often in the hierarchical physical space of "school".  And they're obviously not held back waiting for a teacher to say something!

If you build it, they don't always come.  But, if you coach and model the behaviour you want to see, as we did at Christmas, they will stand on their own.