5 things about the Microsoft Band 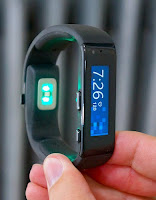 (So I ran into Minnia Feng, the Community Organizer for the Microsoft Expert Educators when I was in Redmond last month and she mentioned I'd taken her "5 item listicles" by the horns.  Long story short, I believe than when I'm faced with a constraint, I become more creative and prolific viz. Twitter.  So I'll continue with the idea of keeping it, or pushing it to five)

Everyone was in a hullabaloo about the Apple Watch recently but I have to admit I'm not a great fan of the Apple ecosystem. ITunes drives me to distraction moving anything in or out and the inability to hack into the AppleTV is an ongoing irritation in my house.  So the Apple Watch didn't catch my interest.

A friend from Seattle (Michael Smith, IT Director at Forest Ridge School) had showed me the Microsoft Band in November and I was curious but I only wear a watch when I'm on police duty anymore.

But then... Ben Schorr (@bschorr on Twitter) mentioned that he could push notes from their Band into OneNote.   This suddenly became important!

A quick Google search however, brought me down a bit:
Problem solving:
I was going to the States that weekend so while I was down in Redmond I went to the Microsoft Store and bought the Band and had them set things up while I was in the Store.  It's worked perfectly now that I'm back in Canada. 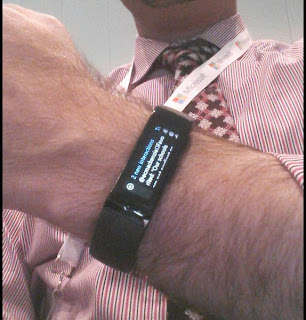 The band comes in three wrist sizes so I definitely didn't want to order it online.  As it turns out, I'm a Large.  You want to make sure it's sized correctly because there are sensors that needs to be pressed against your skin.

So... after a month, what do I like about the Band?

1) It makes me look cool & sophisticated.
People have noticed it!  The flight attendant on the way home commented how stylish it was (for those that have met me, I've never been described as stylish).
It is sleek looking and I never notice its presence on my wrist. It seems to fit comfortably under shirts/jackets.  I am a little concerned that over time the screen is going to be quite scratched.
The battery seems to last about two full days but I tend to take it off when I wake up and put it on the charger while I have breakfast and shower.  That keeps it at 100% when I leave the house each day.

2) I don't look at my phone much anymore for content throughout the day
I have tied the Band to my work email, my text messages, my Calendar, my Twitter and my Facebook messages.  Anything that comes in I just tilt the Band towards me and see the first few words (or I can scroll through the message) to see what's up.  It's convenient when I'm otherwise doing things to confirm nothing is urgent.
You can turn on a discrete vibration when messages come in; I had to turn it off while at a couple of conferences because Twitter can go crazy and my arm started to vibrate along with all the Replies.
It's also kind fun to "feel" the message come in on my wrist and then seconds later see it appear in my Outlook -- the Band often receives and alerts me to messages and appointments before the laptop/phone does.

3) I know how badly I'm sleeping
I've been wearing the Band while I sleep; it has a sleep mode that I turn on and it tracks whether I'm having restful sleep or not.  It also figures out when I have a nap, too, without it explicitly being told I'm going to sleep which is a little bit annoying (no one is supposed to know I fall asleep in the Lazyboy!).  Everything is brought into a web dashboard and I can see clearly that I need to improve how and how long I sleep. There's a phone app for Android/iOS/Microsoft as well that gives you a quicker run-down but the web dashboard is really nice -- speaking as a math teacher. 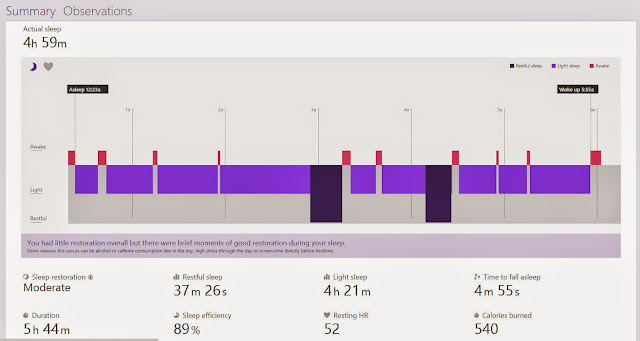 4) I get feedback on other health aspects

The Band tracks my heart rate over time and seems to parallel what I've seen from other sensors when I've kept track.  It was interesting to see how my heart rate rose & fell while I was doing a workout at the gym last night.
It also tracks my caloric expenditures (although not my inputs, which I need more help controlling!)
There's obviously an aspect of gamification here .. I got a badge last night for my best exercise routine ever (measured in terms of caloric output/efficiency/heart rate) and there's competition possible between individuals with some of the other exercise apps you can install.
Being spring in Canada I haven't had a change to try out the UV sensor.

5) Its potential when I get a Windows Phone
So I haven't had a chance to try out the "speak to OneNote" or "reply via voice" that using a Windows phone would allow me to do.  There are rumours that the necessary bit (Microsoft's Cortana) will be brought to Android but my contract is up shortly so I don't mind waiting to make the shift.
The feedback from fellow faculty has been excellent; the health tracking was of great interest to the PhysEd teachers.  I don't have access to any of the other "watch" devices for sale so I can't make a comparison better or worse.  I kinda march to a OneNote drum :)