Playing with Permissions in the OneNote Class Notebook: In French

December 04, 2015
This follows on the hacking work done with OneNote Class Notebook - including adding a digital portfolio and a private planning area for teachers in the Content section.

My amazing colleague Anjuli Ahooja is an active participant with Science On Stage.  As a result of a workshop in Europe last year, she began a collaboration with a school in France.

Two of her classes have been combined with a class of the French teacher.  In order to have collaboration easily between the two different physical and temporal spaces, we use the OneNote Class Notebook.   Each of Anjuli's students here in Canada was teamed up with a French student -- this couple will work together on a project. 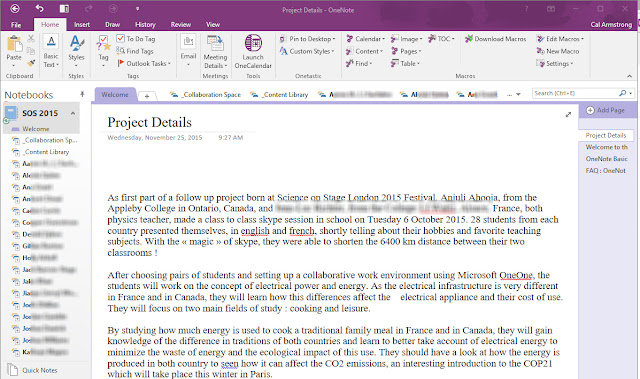 We ran the OneNote Class Notebook app to create the initial OneNote Notebook, setting Anjuli and the French teacher as co-teachers (so that they can see all the content in every student's section as well as modify the Content Library teacher section) and enrolled each of our (English) students as students so that there was a "tab" for each of Anjuli's students.

Their first task was to introduce themselves to each other -- and then they began the data collection for the project.  So far, so good!  It's really nice that the students can work together at different times, on different continents -- OneNote syncs everything between the students and for each of the teachers!
----
Now ... it wasn't as simple as it all sounds the first time through ... Office365 is not initially meant to just share with anybody.  We had to make sure the French school had Office365 accounts for their students.  Then, we set up a site collection in which we turned on External Sharing, then created a site for the OneNote.  When I set up the OneNote, it didn't want me to share with the French teacher, so I just added Anjuli and added the French teacher manually like his students.  When I went back and looked into the situation, the OneNote App is stored on an "App" site collection and I had to turn on External Sharing for that, too.  Experimentation... good times.