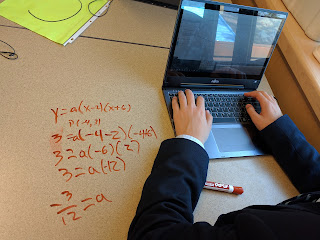 I thought I would start off by answering a question I was asked during #PubPD in October.  Now, #PubPD is a fun evening where teachers gather together in a local pub and over the course of an hour, we discuss questions posted to Twitter, alongside teachers in pubs around the world.  During the dinner that preceeded us discussing the questions posted on Twitter, Melinda Lula, our Hamilton #PubPD organizer asked me "What is your classroom like?" ... and I never really got around to answering that question.  So I'll do that here.
My first statement would be that I don't religiously follow any approach or pedagogy; I think it's important to be agnostic in education since, unlike math or physics, we can't know 'best' or 'right' (we do know wrong, obviously, and I don't go there).  I'm not a bandwagon guy (okay, maybe OneNote, but that's like being in favour of having chairs in class). 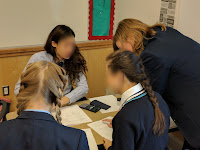 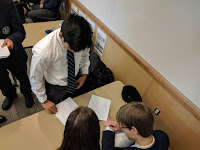 So each day I will have planned something different.  We have 60 minute classes, so I can choose from me talking (yes, sometimes I just show them math and ask them questions throughout), sometimes it's them working individually on problems (although there's never a prohibition on asking questions of their group mates or others), sometimes it's them working in partners or larger groups, or as a whole class and I'm just watching and inserting myself when I feel appropriate.  Sometimes, they all work up on the board showing their work to everyone.  Sometimes they know where they're going; sometimes they don't and they don't get where I wanted or expected.  Sometimes it's guided, like a Desmos activity; sometimes it's completely open ended and they go interesting places that we document and clarify later.  And the 60 minutes each day is broken up in some combination of those.  So... what's my classroom like?  It's different each day.
What's the same day-to-day? 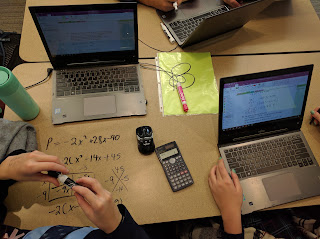 Well, I have a small room to work in -- this does cause some challenges because I am a big guy so I do shuffle around a lot what with tables, chairs, bookbags and other human beings. Fortunately, when they redesigned the rooms, they put up whiteboards on every vertical wall -- and the fourth wall is all glass looking out into a quad, so I can use that space, too  (the students love to use the whiteboards but they have an aversion to writing on the window... they don't quite trust that they can get away with it).  I think room-to-work and documentation is important so I encourage them to write everywhere, and fortunately the tables the school purchased work well with whiteboard markers.  We use Office Lens on our phones to capture written information in the course OneNote. 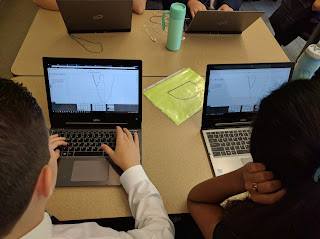 Our tables seat two and I put the students in groups of four; they're randomly assigned at the beginning of class - the students walk in and they see the seating spreadsheet projected. And it really is random; I don't jig it.  This has worked out really well.  I used to not have a seating plan at all and let them sit where they want but it would always settle into "this is my chair and I don't like other people sitting in it", so random works out much better.
I think (hope?) there's one thing that people notice when they walk into my classroom and that's my use of questions.  I've really been affected by the Park City Mathematics Institute and I spend a lot of time thinking (both before class, during and after) about the questions I ask my students.  I've learned to pause a lot before I say something to a student.  To simplify things, I try to use Black&Wiliam's idea that questions should either probe the student's thinking or push the student forward.  I try to avoid answering questions that have simple answers directly ("Mr. Armstrong, what's 5*6?"... "well, John, what would it look like if you drew it as a diagram?"). 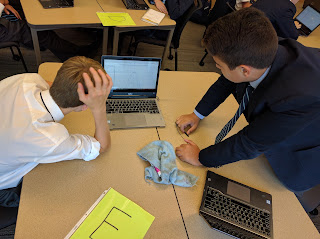 ------
My last thought is pushing on the idea of "like".  I hope my students experience my classroom as a fun place to learn a fun subject.  I want them to enjoy math, to see it as problem-solving and sense making, as a way of communicating ideas.  I do know that as a large (6'4, 230lbs), white male with an aura of authority (seriously, people always think I'm a police officer or in the military) that students -- until they spend some time and realize I'm a push-over teddy bear -- are put off by me.  That's one reason why I ensure my students have access to virtual spaces for questions outside of class.  If they're not comfortable asking in person, they have the opportunity to do so elsewhere (and anonymously, if necessary).