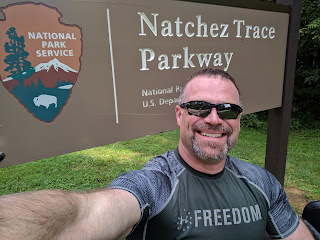 The course I'm teaching runs every day in August, and Sept 1st.  The students return to school after Labour Day and then write their exam at the end of the week (we wanted to make sure we had a properly invigilated exam).
I started the course on August 1st in Biloxi, MS, on my way back from Twitter Math Camp in Atlanta -- yes, a bit circuitous because I was on the motorcycle enjoying my holiday (Mississippi was the last of the lower 48 I had yet to visit and I was on my way to riding the Natchez Trace).  I mention this because I wanted to make sure folks know I started teaching this course under some technical constraints.  It will be easy to look at what I normally have (below) and say "I can't do that/I don't have that" but it's clear you can do it with much less.  Being on the bike, I needed a smaller device than our school tablet and also one that (to be frank) if it got destroyed I wouldn't feel ridiculously guilty.  Our School has one of the original SurfacePro tablets (yup, version 1 without the cool pen that came in later versions!) and it was small enough (maybe 2/3 the size of the latest version) to stow away on the bike but powerful enough to do all that I needed.  I did pick up a Logitech headset from the Biloxi BestBuy so that I would be crystal clear and the 540 model has been great.  I prefer wired so I never have to think about connections. 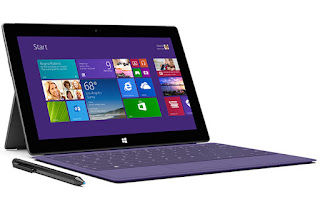 I also have to thank the Hilton hotel chain (specifically Hampton Inns because I like having breakfast made for me) for having pretty good wifi -- I purchased the Premium wifi in Biloxi (well, Ocean Springs, MS to be specific) to start but the option didn't exist in Natchez, MS (my next stop) so I didn't bother at the other two stops (Starkville, MS and Columbia, TN) before I got home.  Part of the reason why wifi didn't matter is the quality of the Skype4Business voice system and the other is that OneNote just keeps syncing & syncing & syncing at whatever speed you get.
But now I'm home - and I'm in a much more powerful situation.  I have a brand new computer with 16Gb RAM and 3 monitors -- and an unlimited 40/10Mbps wired connection (49$CAN/mo).  I did notice a great improvement in content management when I moved to multiple monitors... keeping the Skype call & Teams app on one monitor, OneNote Win10 version in another (okay, the picture shows the Desmos activity the students are doing) and then everything else on the third (another OneNote window, Edge & Chrome browsers, PDFs, etc). I decided to switch to ShareADesktop so that I could drag & drop things onto the far left monitor if I wanted students to see -- ShareAWindow was safer when I was on the Surface tablet.
And then... I have my school pen-based tablet PC that I use to write on.  Now, why don't I just use the plug-in Wacom tablet I have in my drawer?  Because I have students in China - and there is going to be a pause in syncing so by having my OneNote open on my desktop, I can see how long it's taking for them to see my writing show up and match my discussion to that imagery.  I've gotten pretty good at dragging out my explanation so that the ink and highlighting I write on my tablet shows up on my desktop at just the right time as I say the next thing I want to say :) 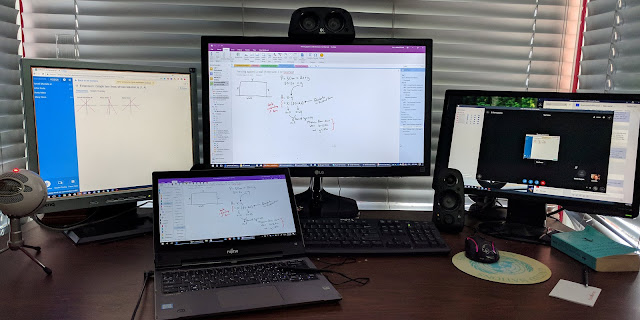 Now the course is going well; I'm pretty pleased (knock wood) at the halfway point.  But there are few issues I wanted to highlight.
1) Desmos in China -- my students in China have found that Desmos loads really slowly in China.  They haven't had much of an issue with Skype or OneNote but I often have to give them a five minute headstart so that they can get the Desmos activity loaded.  Again... adapt to meet the technological roadblocks.
2) Discussion -- As someone who treats "time that I'm talking" like a lawyer's billable hours in my regular classroom (I have used a stopwatch to try to minimize "me time"), I find that I'm talking way too much and doing everything I can to turn the mic back to the students.  Now part of it is I only have four students, and I have done activities where I've paired them off in their own Skype rooms (and flipped back & forth between the rooms to listen) but getting more of S<==>S has been difficult.
3) Teams -- the students aren't used to using non-F2F communication to talk to teachers.  Our math faculty has tried to avoid having students email them questions outside of class and we've tried to use Yammer to encourage their out-of-class discussion but it's a real school culture issue.  I thought lacking a physical opportunity to drop by the math office or classroom would encourage them to turn to a discussion area like Teams but so far only one student has found it useful (but that is 25%!).  I have been impressed with the way he & I have been able to use it -- I've been on the side of the road with the bike answering his math questions, and he's drag-and-dropped screenshots of Desmos & OneNote to ask & describe his issues.
4) Integrity -- for their assessments, I have them set up a Skype call with me and then I watch & listen to them as they write it.  Now, I can see all four student's OneNote on my monitors & I flip through their audio streams but (a) they could have multiple monitors (b) someone could be handing them a solution (c) mobile phones (d) etc.  I have to trust a little and the exam will tell the tale.
The good?
1) OneNote ClassNotebook continues to be awesome (okay, I have a built in bias)-- it has captured everything, both my work and the students and then the Skype recordings capture the discussion.  And, when the students in China experience the occasional blip in connection (twice, now, one of the students hasn't been able to share their desktop "for network reasons") I have been able to show their OneNote work and they've been able to talk through what is shown through Skype.  If you're teaching an online course, you are missing out and working too hard if you're not using OneNote!
2) A/M/R OneNote Sections (more about that here) -- I know this capability is eventually going to come to everyone's OneNote ClassNotebook but for online courses this is gold.  I distribute the Exit Quiz, Tests, TIPS (Problem solving questions) into the students' A tab using the ClassTools, they use ink to write their responses and then using the Review tool, I drag each student's page into their M section (private to me), mark it and then drag it into their R tab (locked read-only to the student).  Totally paperless, and a great work flow.
3) Skype recordings -- hit the button at the beginning of the hour, four hours later, hit the button again (okay, usually close the session without hitting stop and have Skype be smart enough to stop recording) and then 5 minutes later, I've got an MP4 to share.  It records whatever it shared, all the audio and any chat conversations (rare, but usually "Sir, I have to leave for a minute").  It always bothered me I couldn't have a recording of a GoogleHangout without having to make the Hangout public in YouTube as I was recording it.  Not to mention we've been using the same Skype link all month without having to resend "click here to join".
4) Desmos -- next to OneNote, Desmos is why I consider this course a success, in particular the activities that allow us to work on some questions, use the PAUSE button to bring them all together, the Dashboard that allows me to see where they are, what they've done and what they've answered, and the ability to overlay/share responses with the students.  I look forward to having more time to adapt and create new material as the Activity Builder & Script Builder become more familiar.
5) The kids -- honestly, for a trial run of a course, I couldn't ask for better kids.  They are hard workers, they are patient, they are polite, they are asking better & better questions as we go along (obviously, the "team" spirit takes longer when we're only online).  I created an anonymous Microsoft Form so that they could give me feedback and the 1 entry that has been made so far has been about the speed of Desmos in China (which we've dealt with).