November 27, 2018
For a number of years now, instead of a fixed (or no) seating plan for my classroom, I've been using visibly random grouping (PDF).  I have an Excel spreadsheet (link) that takes my class list and randomly assigns them to a 4-seater table (2 tables that seat two students). I project it at the beginning of class as they walk in.  And I use 5 plastic covered letters to randomly place the groups inside the space. 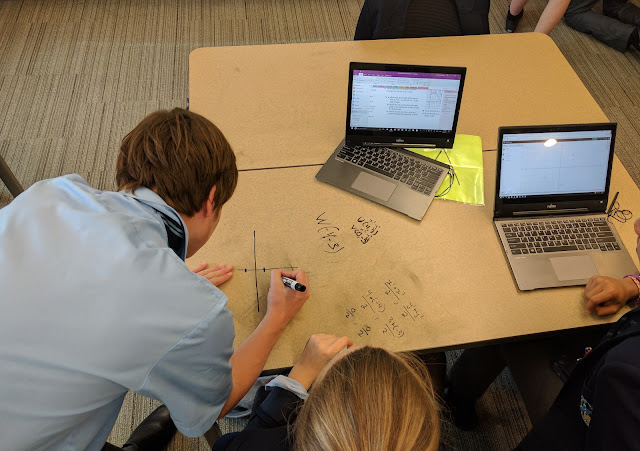 Now, my classroom has one fixed projector and the rest of the room is either whiteboard or window -- both vertical surfaces are used to write on, and the tables have been explicitly purchased so that the surfaces are write-able. So while we do a lot of work seated they will also go to the whiteboards individually or in pairs (the table seating decide the pairs).
While the pedagogical reasons for using visibly random grouping are laid out in the attached article above, I bring it up because of what happened the other day.  Someone else had used my room for a discussion and had left the classroom tables all in a U.  So I shrugged and thought I'd try something different... as the kids walked in, and said "just sit wherever you'd like in the U".  Now, I have three classes of Grade 10 students in a row and in each class, they sat down in a gender split, boys on one side, girls on the other and within that split, the second language students sat on the outside of the U.  As we began class, I pointed out to the students the manner in which they were sitting (leaving out the 2nd language issue) and why it was that I let the universe decide the way they would sit.
We once had an exchange student speak to the faculty and she recommended a seating plan because of the 2nd language issue -- if you don't structure a way to incorporate an outsider, it makes it difficult for them to work their way into the group.  Continually mixing them up and bringing different people together helps break down barriers.
Are there other problems that arise?  Oh yes ... the universe can decide to put all the energetic boys together on a Friday afternoon. Or they can put all the quiet students together and very little ever surfaces as they all work on the problems independently in spite of my structures & cajoling.  But in the long run (as random things in the universe tends to) the benefits outweigh these minor problems. 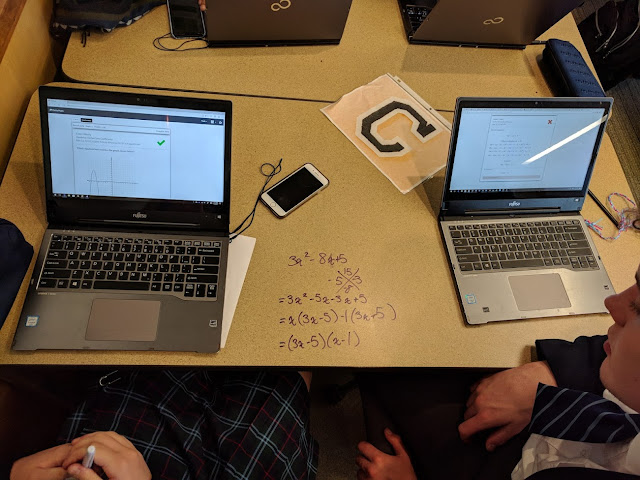 Do I ever cheat? No. I always let the random feature of Excel decide.  That said, I have had conditions imposed outside the classroom ("Johnny is not allowed to sit next to Timmy") so I will sometimes press F9 ("recalculate spreadsheet") until those external conditions are met.  And if students need to sit close to the projector, I just shuffle the letters on the tables once the spreadsheet is projected.
Do the kids like it?  That answer tends to run 50/50.  The students used to great social power tend to hate it; they're used to sitting in a seat that controls the space and highlights their perceived status.  The kids who like to hide also hate it, because most of the time they lose their hiding spot. And in the end, I like it because it highlights equity... it's not me imposing a structure.  And it encourages them to work with other people, if only for a short while.