You spin me 'round, 'round, baby ... Audio & Video Reflection 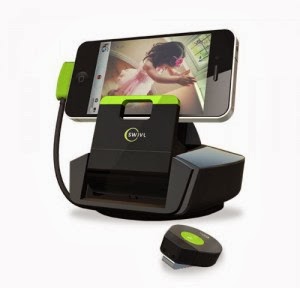 One of the things I stress when working with teachers is to have them record themselves in the classroom, either using audio or video.  It's eye-opening (and illusion-shattering) when you see yourself on the screen saying things and doing things.  It's made my practice more self-reflective in the moment -- what would I say or do if I replayed this later?

We've got a new little tool that alleviates two of the problems with just putting a videocamera at the back of the room:


So technology to the rescue!  The Swivl camera base http://www.swivl.com/ will take your phone or tablet and connect it to a base that swivels automatically with you as you move around the classroom.  It does it by using a small clip-on (or lanyard-ed) microphone, so as it tracks you it is also wirelessly recording you.  The quality of the audio is amazing and, so long as you don't turn your back to the camera and walk away, the base tracks you around the room (of course, once you face the camera again, it swivels to find you).

It's a little expensive for individuals (200$) but for a department or school that's interested in improving teaching via reflection, I think it's invaluable.  Just not having to have a second person to run the camera is huge -- and since it's initially stored on their personal device means it begins the conversation under their control (teachers are often leery of others seeing them teach, even if it is to offer constructive suggestions).

We've also used it for student presentations, again to improve the audio and follow the student with out a camera operator, but more on that later.