5 Reasons Schools should run with Office365

January 11, 2016
It often surprises me when folks don't know about Office365 and/or don't know how Microsoft has changed its educational offerings in the past few years.  Although Google definitely had the lead up to say 2011, Microsoft has quickly come up from behind and re-invented the educational space for teaching, learning, collaboration and creativity.
So, briefly, my top five reasons* why any school would benefit from running Office365.

1) OneNote and the OneNote Class Notebook
There is nothing comparable to OneNote and the OneNote Class Notebook / Staff Notebook anywhere on the market.  It's paper... made digital!  It allows an easy transition from folks used to working with paper but also is a springboard to digitize everything in a classroom, office or home.  It makes it easy to take a quick note (on any device) or write a thesis.  It's a container for everything (documents, spreadsheets, presentations, sound and video files) but then allows you to organize, categorize and summarize.  It has collaboration built into its ecosystem and things can be shared for reading or editing.  And although it aids making a transition away from paper, it's also great kindling for those being transformative -- there are no barriers to creativity as you'll find in text-based environments and since OneNote is ink-based, it's open to happenings of creativity through easy sketching and doodling.  So much is built into OneNote (and linked through Office365) that you don't have to track down an app -- it's all there, tied into the ecosystem.  And -- most importantly -- it caches on the device so if you lose the internet (by geography or misadventure) you can continue working and things sync up when wifi returns). 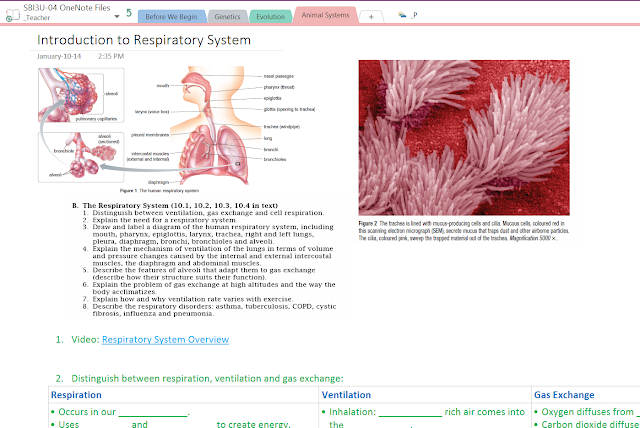 It's cross platform so I can take an anecdotal note on a student (or a pic/video) from my phone and it automatically appears on my laptop - and on the student device if that's the section I posted it in.
I've written plenty on OneNote already so I'll just include these links for more information... and a series of educational examples that showcase the transition we've made away from and beyond paper.
But just to emphasize... if only for OneNote, people should use Office365.  It's that much of a game changer.  But more importantly, it allows people to easily begin to change their game, it's such a gate way drug to pedagogical and learning changes because of the low technological threshold and the near infinite opportunities not hog-tied by being text based and bringing all the convenience of paper in a digital format.


2) Delve
In a modern collaborative working space, a simple list isn't sufficient anymore.  And search isn't smart enough.  Having an intelligent agent available to every student, every faculty and every staff member has been an unexpected and universally appreciated boon.  Things don't get lost.  People know what they should be working on and what's important.
Delve is the face of the background search built into Office365.  It knows all the content and shows you cards of things that should be important to you.
When you first visit the Delve page, it shows you the global picture of things going on that involve you.  So for me, I see some math things I've been working on with my colleagues. 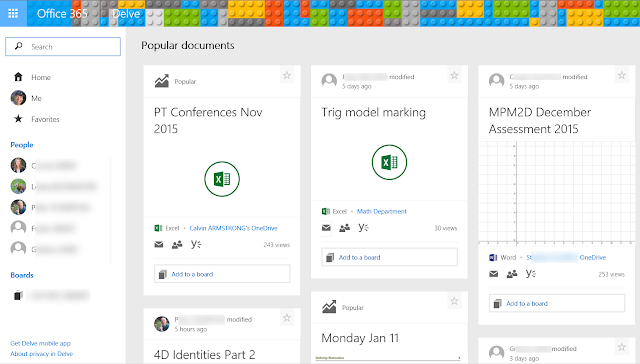 Then, you can drill down by person or search term.  So if I know that my principal, Katrina, has been working on a document for me, I can track it down.  I don't have to remember where it's stored or what it's named because Delve is more concerned that she and I have been working on it recently and it knows that Katrina is someone who I value.  (How does it know that?  It measures the volume, spread and how quickly I reply to emails within my environment.)
Delve also measures what my colleagues find important so a document that has been opened a lot recently gets moved up in priority - which is why ParentTeacher Conferences is showing up; we're coming into another PT conference shortly!
Given the vast number of documents we have emailed to us (it does attachments) and that exist in shared spaces (including OneNotes) it becomes impossible to know where everything is located - Delve does that organizational part for us.
And its mobile app gives you a daily "here's what's popular" list, too!

3) Collaboration
Every aspect of Office365 is collaborative.  Documents, spreadsheet, presentations, sways, sites -- there's a share button everywhere and in almost every situation it's synchronous collaboration.  Want to work on a presentation together?  Click to share... and it surfaces in Delve so you know what you're supposed to be working on together.. and who's updated it recently.  And you can pull or expire permissions easily (and it correspondingly disappears off of Delve).

You can work within the online Office365 system, which gives you basic editing options necessary to pull of most tasks or push your work into the full desktop versions of Word, Excel, PowerPoint & OneNote with the press of a button.  The convenience of the online apps is noticeable when you're on a different device.  It really opens up the opportunity for BYOD because it really doesn't matter which device you're on ... the mobile apps are as responsive as the desktop ones even if they're not as feature rich.  But, since most people have their own full-powered device either at their desk or in their home, they can use the full power when necessary.

4) Depth of Ecosystem
For us, OneNote and the OneNote Class Notebook is the container for everything and we use it as a springboard to the other aspects of Office365 : our documents, videos, online meetings, etc are all linked from or embedded in the appropriate OneNote pages for students and faculty..
However in the administrative side of the school, they're still Site driven, so they use the more traditional site structure with document libraries and calendars.  It doesn't matter!  Delve ties everything together regardless of the way people work. 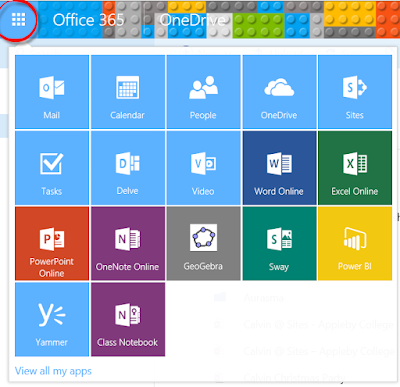 Everything is brought in to the mobile environment with all the productivity apps but also mobile specific apps like Microsoft Lens (which ties your camera to OneNote, Word, etc).  They added a complete video storage & distribution system so we can publish videos involving students and not worry about having them spread across the internet and we have our own discussion area in Yammer that is tied into every other piece.  You may notice the Y* Yammer button in the Delve screen above.  And faculty and students have been using data from Excel and moving to experiment with PowerBI, Microsoft's business visualizing software (that's again, both online and on device).
And it's all tied together with one password and one Waffle menu (circled in the image above).

5) Customer Response
Microsoft has been incredibly responsive to user suggestions.  They have an active UserVoice system that has prompted a great many developments.  There were over 400 additions to Office365 in 2015 - and these range from minor improvements to the addition of completely new applications like Sway (an online presentation system) to the forthcoming Planner (simple project management).
They also have a large Yammer community through which you get a lot of troubleshooting, training and roadmaps to ongoing development.  Because it's cloud based, things can change quite quickly -- when doing training, I emphasize that what I show will likely change within the month.

This is not the Microsoft I grew up with nor is it the Microsoft of five years ago -- this is a different company with a markedly different approach to infrastructure and education.  And I'm happy for my school to benefit from it.

*I am not including the fact that it's free.  Lots of things are free but everything carries a cost.  I'm also not including all the benefits of the paid plans because, well, they involve money.