Why Delve is my best friend

#2 is Delve.  Delve is the user face for every bit of intelligence that is developed from  "Office Graph", Microsoft's background data analyzer on the Office365 system.   People will never see the Office Graph... okay, programmers may... but they'll see the results of what essentially is a blend of Watson (from Jeopardy fame) and Rosie (from the Jetsons) when they turn to Delve.

The immediate problem? With everything saved in OneDrive, Office Sites, OneNote, Yammer and Office365 Video students and teachers have a ridiculously long list of files and folders available to them.  And not only do they have their own files & folders, they have people sharing files, folders and OneNotes with them, too.

This isn't just a Microsoft thing ... I also have a 120Gb GoogleDrive that's nearly full, and I depend on the Search in GDocs to find things.  But straight-out Search is inefficient since it doesn't reflect connections or priority.  It treats every document as equally important and doesn't give any context to the contents or the authors involved.  Delve does.

So every day, I go to Delve to start working.  It shows me the documents I should be working on based on (a) what I've been working on recently, (b) what others have been working on with me recently (including any new documents) and (c) what Delve has found to be important that I wasn't even aware of.

How you, say?  Well check out my "People" list to the left of the image below.  Delve has picked these people as important -- the first is our Academic Director (yeah, we work a lot together) and the 2nd is our Head of School.  I've never worked on a document with him (ever) BUT any document that Innes has shared has been viewed by likely 90% of my colleagues within 2 minutes of him emailing something out -- people read his stuff, and they read it quickly after he posts it.  And OfficeGraph is reading all those activities in the background, measuring who is connected to whom and how quickly they react to things (as a mathematician, this data analysis just makes me go squee!)  So any document that Innes works on that is shared with me, boom! it shows up near the top. 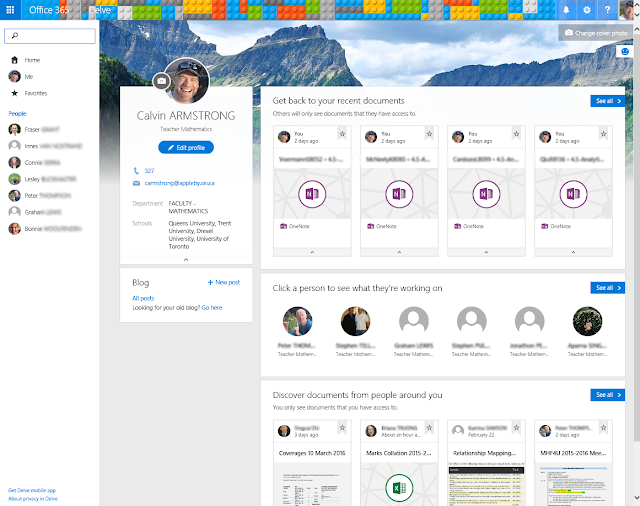 So, instead of going to a huge list of files and typing in a search term and looking through a still-long list of files, I turn to Delve.  When I first open Delve up (now, this is on my desktop so it shows a lot more files) it shows me all the files I will likely be working on.

Notice (well, let me point it out to you) that it looks through the attachments on my email, my OneNotes, the folders on sites that I work on... and gives me one-click access to start working on them.  And then, if I want, I can filter by people on the left or do searches by people or content ... but again, I don't get a simple list back... I get a prioritized list based on the above connections and behaviours.

And the more I use Office365, the more OfficeGraph analyzes my behaviour in the background and Delve shows me what I need to work on.
What comes next?  The Delve App ... but more on that later.