I am an impatient man 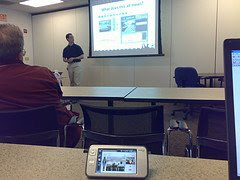 I admit it. I harass people who put on conferences, seminars and talks on mathematics, education and technology and then don't stream or video-archive them. Given the size of our country and the cost of travel between major and minor centres (not to mention the whole green aspect of the issue), I think it's imperative that we use video to make the audience as large as possible. For example, there's a math-education group in Canada -- they advertise really interesting seminars. To everyone in Canada. They're held over a lunch hour or in the late afternoon. So they get, what, 20 people in a room in Ottawa or Edmonton. This is so wasteful. How many more could they reach if they stuck a FlipVideo in the room with them and plunked the video down on their website?
It can't be hard to do; I've done it. NCTM in 04, MAA in 05. I didn't do it at the OAME last year because the room was so small and crowded with people there was no camera angle ... but then I also posted everything on my conference wiki (which is a whole other issue).
Now, people will say ... what about the cost? Why pay for going to the conference when I can just watch it online? Well... there's a big difference between being there and watching it live or even later. Face-to-face gives us so many opportunities that video just doesn't -- I'd much rather attend in person. But what about using a micro-payment model for the video archives? Heck, even a tip-jar. For live-streams, why not a video-attendee rate?
This issue has always been on the back burner for me (ask the poor administrator of the math-ed group mailing list) but Educon 2.1 really made it clear for me. If I'm going to a conference physically, I want to make sure that people who aren't as lucky as I am can get in on it, too!

mcbloglin said…
Hi Cal,
Just back from the Will Richardson conference this weekend. As I tweeted, can't argue.
But here's the thing; we had issues with bandwidth, connecticity, Will R. set up a U-Stream on Day 2, we had duplicated chats and wikis. Was it poorly organized? In what way? Venue technicians?
I agree that we should be there, but how do you get there from here?
That seems to be my framing question.
March 1, 2009 at 1:16 AM

Cal said…
Was it poorly organized because of the internet issue? Absolutely not... we're (the web-aware community) are ham-strung somewhat by being ahead of the crowd. Would live-streaming be best? Yes, definitely, and maybe that's our long-term goal. But we can take small steps. Will was wearing a mic. Plug an audio input into a videocam aimed at the stage/room and upload the video to a host or to iTunes. (iTunes would give you a revenue stream, too, if you wanted.) As infrastructure improves (and prices for hotel/convention centres' internet access drops) we'll transition to live-streaming.
The video archive would be helpful... how many times have we returned to our schools and wished we could share our experiences with our colleagues. Our notes seem so deficient.
March 1, 2009 at 7:16 AM