What a beautiful day...

February 10, 2009
One thing LiveJournal has is a nice space to automatically put the music you're listening to... here I have to do it manually... U2, Beautiful Day.
Anyways... what makes it s0?
1) 10C, rain in the morning... means riding the motorcycle later this afternoon & tomorrow!
Oh, but then there's the professional part
2) The contractor was late this morning, so I was 5 minutes late arriving to class; my grade 9s were working away. Sure, some of them were discussing soccer's latest news but they were seated with their work open. What kids!
3) The same MPM2D; we're finishing up the unit on parabolas and quadratics and the like. I gave them four different quadratic curves, different concavities, one just with one arm of the parabola, one with a series of parabola. They have to come up with questions involving those graphs and all the content we had this unit. The questions are turning out to be great -- I'll post some up here once they hand them in but for sure they're going to be used in the future. They're pulling everything together and some are even bringing in Linear Systems from the Fall, too.
4) Towards the end of class, I interrupted them and pulled up the graph CalculatedRisk posted about last night - huge discussion ensued about real data, parabolas, economics, politics and the like. And using mathematics to make 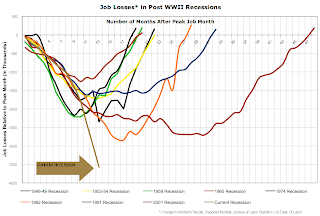 predictions and provide analysis. Given that these are accelerated Grade 9s, most of whom have trust funds of some kind, they all have considerable interest in the economy. I figure I'll spend Family Day planning some kind of summative with this -- Maple, here we come!
We also discovered that all the recent recession has seen me have a life change (81/82 start high school, 91/92 graduate university, 2001 start at this school).
2) AP Calculus - I will be away in DC for the NCTM conference in April for the entire week. This sucks, of course, for a class that meets 6 times a week. So, having been to Educon and seeing it in action I've begun playing with Mogulus video in my class. Well, the first time live it worked amazingly well! It means I have to have a lot of stuff preplanned and use BBFlashback to create my example videos beforehand but wow, what potential. It's a different style of teaching than what I normally do but it's better than a week of substitutes.