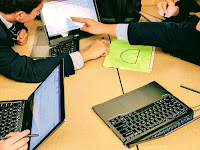 Sigh. It's tough to disagree with Fawn Nguyen. (http://fawnnguyen.com/maybe-less-tech-in-math-and-school/)


She wrote, in particular:


I want them talking and interacting more than anything! Learning mathematics is a social endeavor. Here’s my perennial classroom routine, “Turn and talk with your neighbor.” I want to bring back the arts of speaking and listening, reading and writing, debating and presenting.

Now, if you've ever dropped by my class (and, thanks to #ObserveMe you're always welcome to! I just realized, I never wrote about #ObserveMe ... something to correct over this March Break) you'lll notice a lot of devices. 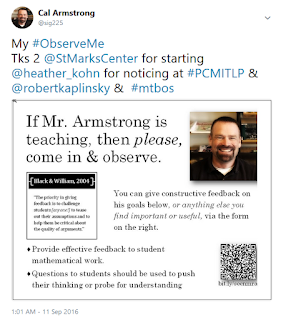 My classroom has 1:1 pen-based Win10 TabletPCs -- everyhone thinks of "Surfaces" but they're actually made by Fujitsu.
My classroom has OneNote, which captures as much as everything that gets written and a part of what gets said/displayed/acted out using audio/video capture.
This means we have access to digital ink - so everything that I write or students write become part of the conversation - it's captured and it's collaborative and it's archived.
And of course it has many of the other add-ons that other folks use: A projector. Desmos, GeoGebra, Excel, Wolfram-Alpha, DeltaMath, Camtasia, etc.  But not a lot. We don't spend a lot of time (and don't have the money) bringing in special applications or web-apps -- the focus is on doing math with good tools. Tools that emphasize students constructing mathematics and sharing their ideas.
But seriously... it's the first two that make ALL THE DIFFERENCE.  And it's what Fawn is missing out on. When you choose technologies that extend naturally out from paper, that promote sharing, the capture without any additional thought, you increase the power of your learning space and build a powerful sharing community. A mobile, & often personal, device using GoogleDocs isn't going to do that. 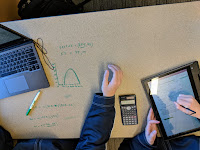 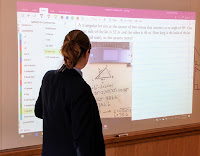 Our classroom is primarily a place of discussion, writing, debating & presenting. A lot of writing. A lot of presenting. And the technology supports that.  The walls that are covered in whiteboard and the moveable desks that are writeable/eraseable support that and OneNote takes care of the easy capture/sharing/archiving of that information, too! And once in OneNote they can continue to build on it freely using digital ink.
Make deliberate choices about technology in the same way as you make deliberate choices about problems -- low floor, high ceiling. 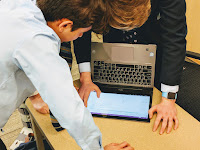 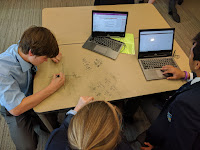 So the question posed to her was "How do u incorporate tech into a lesson?"
And this just isn't my class -- this is across our school.
Technology isn't some icing that you put on the cake. It's included with the rest of the ingredients, mixed properly so that the CO2 bubbles lifts the cake. 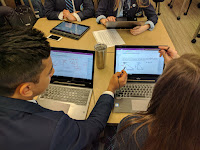 Too often, with the wrong technology, you get a flat cake that nobody enjoys eating, and all the icing won't make it better. You force them into methods that get in the way of learning. You throw raisins into a perfectly good cake. You make them use keyboard-only devices that get in the way of the mathematics. You use software tools that isolate students into a smaller space or emphasize the wrong behaviours, instead of broadening and opening up their ideas to others.
People (and I'm looking at administrators, tech folks, thought leaders) have pushed the wrong technology into classrooms in an effort to bridge the digital divide.  Instead they have put us in this isolated-learner interregnum with the wrong tools that Fawn decries.  It will end, but not by reducing the technology but by choosing the right ones.
Your technology should be invisible. It should flow between spaces without barriers.
And as for dinner, for me, it's a non-technology space because we come together to break bread and enjoy each other's company. Bring out the devices after the cake.