How do you know you're right?

September 13, 2018
So I'm only on the 2nd class of the year in my Grade 10 Math course so far.  We start late, and we only see them for 3 hours a week, so yes, we move a little slow.
I had set them some review problems in Grade 9 Math, mostly questions of simple algebra, linear equations, graphs of lines, etc.  And had them work on the questions about as freely as I could -- but since they're new, they didn't express much freedom. They didn't talk much, they certainly didn't talk to each other, and they didn't check their work with each other. This will change.  I had deliberately told them that I did not put the answers at the bottom of the OneNote page and that they would have to check their work somehow.
Ten minutes in, I did a screen capture of a student's work from their OneNote Section and pasted it into my OneNote page for the day and asked them "How does the student know they're correct?" 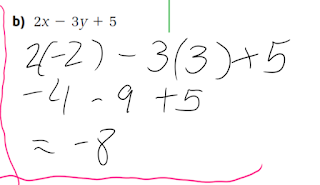 The obvious answers came up:
And then one student said they would google the answer.  Great!  So we googled 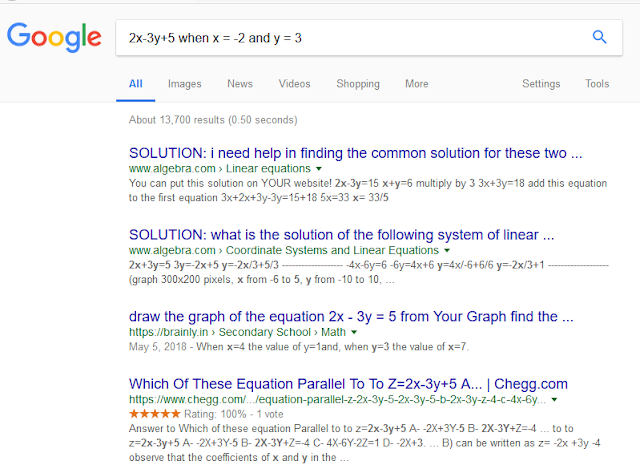 This was going to waste a lot of time ... none of these were our questions and we're only asking for "is the answer correct?"
Another student brought up Khan Academy, so we tried that.
Typing in the question 2x-3y+5 when x = -2 and y = 3 into the search box gave us nothing.  A student said we should just type in "simplifying expressions" (which was interesting because the question said evaluate).  But we tried that. 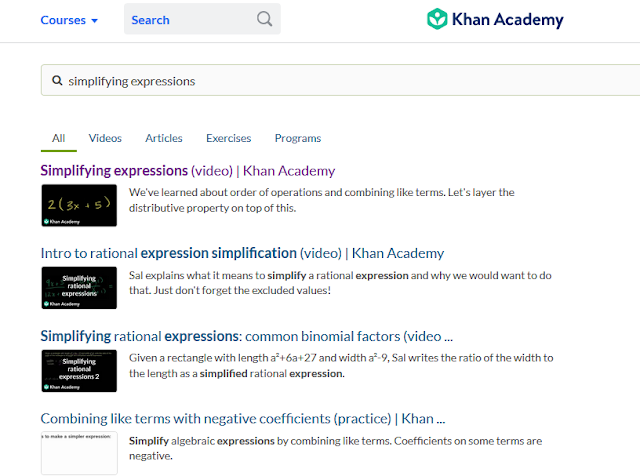 This led us to a 4 minute video on distributing to simplify expressions. A helpful video on a topic which only tangentially applies here.  Not very efficient.
So we then talked about other possible technological aids, and across three classes, we brought up the following:
1) WolframAlpha - http://www.wolframalpha.com
W/A was quick; it gave us the answer we expected. Now, if we wanted to pay we could get the step by step solution, but if the question is, "is the answer correct?" we're good to go. 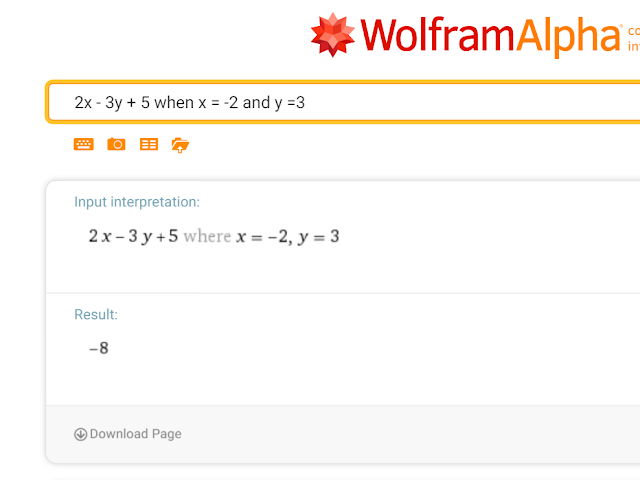 2) Desmos - http://www.desmos.com
This one surprised me... of course, it's going to do the calculation. The interesting question will be when we move into quadratics and algebraic manipulations and how Desmos & the students will adapt to the different requirements of evaluating correctness.

3) Photomath - https://photomath.net/en/
When one student brought up Photomath, another student tried to shush him -- like it was some secret that math teachers aren't supposed to know. But yes, Photomath will show whether or not the answer is correct. It's free and it does show the steps.  It wouldn't do the substitution but once that was done, it would evaluate just fine. 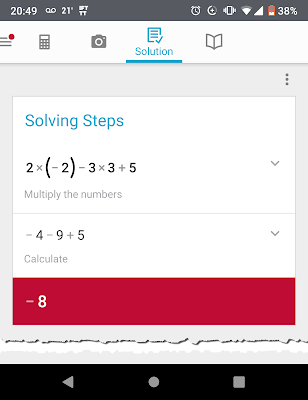 4) GraspableMath - http://www.graspablemath.com
I brought this one to them in anticipation of our foray into linear systems. It doesn't actually check the answer but it does verify that they're doing their steps correctly, which I kinda like more.  It's not the "here's a maybe helpful similar question" that Khan Academy might give you; it's the actual question bounded by the rules of arithmetic & algebra.  If the students have attempted something outside the "rules", then GraspableMath isn't going to let them replicate those steps.

I *do* wish that it had #digitalink input so that they could use their pens rather than have to labouriously type out the equation; I hope that's down the road.
I really appreciated Lauren Nelson's (@LENelson49)'s question on Twitter:

I think that
(1) letting them know I know these tools exist ("shhh... don't let Mr. A know about Photomath!") is important. As a general rule, I don't put marks in my mark calculation that come from work done outside of my view -- it's why I use OneNote, Vertical/Horizontal non-permanent surfaces and other observations & conversations so much.  I have data of them doing math in front me that I don't rely on homework, worksheets, etc that their parents, their tutors, their apps may be doing for them.
(2) showing them how I use these tools to verify I have correct answer (or solution) validates their existence beyond the "cheating". Professionals use these tools to verify their work; students should get used to always checking their work using any convenient tool -- the greatest authors had to go through an editor.
(3) normalize the fact that they may need support when they are alone - they can't always ask anybody and they don't need to spend the time searching for a perhaps only tangentially helpful video from KhanAcademy/YouTube when they only need to confirm their correctness.
(4) encourage them to use these tools to explore -- what happens when we use higher powers? How complicated can we make the expressions before we break the program (Photomath will tell you it can't solve that question yet)?  What do all the other things that WolframAlpha brings up mean? W/A will bring up any mathematics related to your question, so when we moved into quadratics, graphs, imaginary values and calculus come up quite often.
This was a really simple question to verify the answer to, but by doing it with something really simple, it helps move them into situations where the expressions & equations are more complicated.