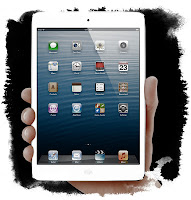 I always hesitate to discuss this issue publicly because I know I'm coming from a place of privilege.  We had Apple in for a meeting last week and they were, of course, trying to sell us on the iPad -- but it would be a step backwards for me.  I've been teaching at laptop/tablet computer schools for 15 years now.  We skipped over the transition-space that people are now in with their 1:1 iPad programs mostly because compressed technology like that didn't exist at the time.

The iPad is not the be-all-and-end-all of education technology and it is slightly discouraging that high school folks are not moving to more accommodating technologies even though the cost is greater.  The principal issue is that iPads are very limiting to both the teacher and the student.  They do not do construction well -- just compare writing anything of any length with an iPad versus Word on a tablet computer.  Contrast the expansive but integrated and organized nature of OneNote on a tablet PC with any app on the iPad; it is too difficult to bring together material of different types and formats into one document-space and then work on it to put together something meaningful.

That's not to say that what people are doing with their iPads isn't amazing. You use the tool you have, and you use it to the utmost.  But, they are not the solution to issues in pedagogy to technology in high schools.  They're a stepping stone, and a small one at that.  For many schools, limited by budgets and policies, iPads form that intermediary step.  They will eventually move towards a more sophisticated tablet environment.  I would say objects like the Microsoft Surface are likely the next step for schools not already invested in iPads.