February 06, 2013
One of the adaptations to the schedule that began last year at school was the addition of an hour of "meeting time" available every Wednesday morning.  Now, it is often consumed by department meetings, a (incorrectly named) PLN and faculty meetings, I do occasionally get some time to do some large-scale PD.  So far I've had two 20 minutes sessions.  To be fair, doing PD in front of the entire faculty is not particularly productive -- they are all at different levels in terms of pedagogy and technology that there isn't a lot of common ground to build on.  And what I'm not all about is wasting their time showing TED talks -- they don't need inspiration; they're already an extremely motivated group, eager to learn. 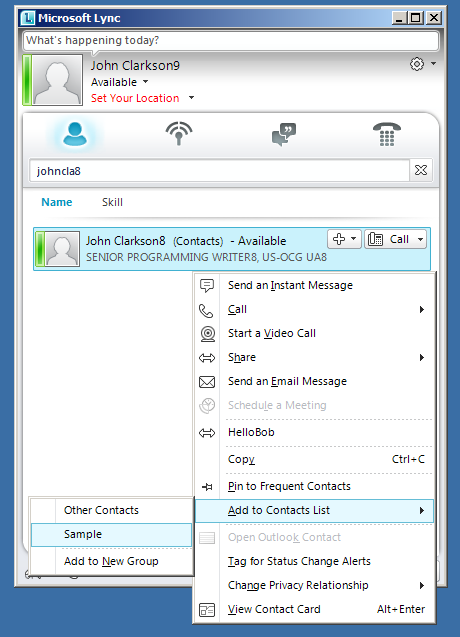 This time, I thought I would go over Microsoft Lync.  Now, Lync is not particularly well know; as a form of introduction it's really similar to Skype or MSN Messenger (and in fact, it's on the way to being merged with Skype).  It's deeply integrated into Microsoft Office and our Windows network/OS so it makes sense to try to leverage its use across the school.  Any mention of a user on our system (from email to course webpage to OneNote) has behind it a way to initiate a conversation with that user; it's part of the ecosystem.  Everything is logged centrally so there's an aspect of security that's not true with other messaging systems.

The experience was incredible ... there were about 70 faculty members and most of them were enthusiastic participants.  So much so that it was likely overwhelming to the less investigation-oriented.  It was a lot of fun to be sitting on the theatre stage watching them interact with their laptops, comment to their neighbours and at the same time see their communication online.  I couldn't stop chuckling.  I didn't lock anything down so they were pushing all the buttons ... they were modifying powerpoints, answering polls, chatting, video'ing, you name it.

Some folks want the pedantic "Step 1: do this... Step 2: do that".  In a large gathering, that's not practical and it also doesn't mesh with my beliefs on how students (and in that I include teachers) learn.  Lync was a playground that needed exploring and folks needed a chance to make mistakes and recover from them.  When we're in smaller groups or 1:1 we can do the "here's how you do this" but for a short time they just need to splash around in the pool.  When they want to develop a technique, we'll do that in better conditions.

And did it work?  Well, I had people talking to me about ideas on how to use it in and out of class, with both students and our parents.  And we did  have a snowday on the Friday and I had folks who had never used it Lync'ing me with questions. So long as there a buzz, I'm happy.