March 25, 2019
When we return from March Break, we tend to have a teacher-only day of PD and meetings.  The admin had broken the faculty into 3 groups for two sessions and hadn't planned anything for the third so I suggested I run a tech PD.
Since this would be my swan song as the tech guy I wanted to do something interesting but also to value the time of the teachers. I would have 30-40 teachers at a time, so I knew I couldn't do a workshop or a "presentation" of tech so I turned to an idea I've had before -- a Choose Your Own Adventure PD.  Why?  Well, I haven't had any time to give them PD this year so I had a lot of things to share, I wanted to make sure they found it profitable, and I wanted it to be something different than what they'd done before.  (I've talked about Choose Your Own Adventure earlier on this blog here.)

I had a long list of things that were new, new-er or just hadn't reached universality.  I was a little restricted because IT doesn't like me sharing things that aren't approved, so I only did things I had sent out previously or were automatically included in our Office365 subscription (and hadn't been turned off).  As you can see, I didn't get to include everything on my list.  As it was, people did say it looked like a lot, but the idea was not to get through everything!

I opened up OneNote and created a new Notebook. I did use my personal Onedrive because the School doesn't allow us to share outside of our school and I knew I wanted to share it. I kept it to just one Section -- although I considered making multiple Sections so I could password-protect some pages to make it a little more break-out like (and to avoid people peeking at what pages to go to if I had made up a stronger narrative).
I also kept a piece of scribble paper next to me so that I could keep track of the CYOA map of the exercise.  (I would have not needed the scribble paper but I was working on my desktop and not my pen-enabled laptop... I wanted the three monitors of space to be more efficient in searching, copying/pasting and image editing).

I wrote the first page and started to scribble down the branching on the CYOA map. 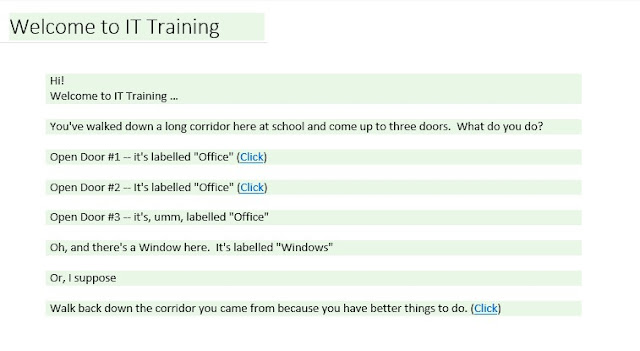 The option I wanted to make sure I included was an opt-out. I really respect our faculty -- they're bright, talented and curious, but they aren't always invested in what I'm invested in, and that's okay. So I wanted them to feel free to explore any tech avenue that interested them, not just those that I had lined up.  They were welcome to do whatever they wanted tech-oriented so long as they reflected & shared what they learned in a Teams message later.  As it turned out, none of them did that!  They all did something in the CYOA.

Then I broke it up into 3 (later 4) options and started to add pages from there.  There was no overall pattern, although I did make a path for "Accessibility Tools" and one for "PowerPoint Tools".  The first door let to MyAnalytics, which is the newest and most (potentially controversial) tool added to our Office365. I did throw in a couple of (literally) dead-ends where the teacher ran into a "sorry, you were killed" just to maintain the CYOA atmosphere.
I added the pages and did the internal linking (so easy -- just right-click and Get Link to Page & then paste it in as the link).  I used a lot of pre-made videos from YouTube to provide them with assistance (thankfully, YouTube lets you start an embedded video at a particular time).  I kept the videos to under five minutes so that the teachers wouldn't feel oppressed. I also created tasks for some of the more complicated tools, so they'd have something concrete to try.
While I built the Notebook, I named all the pages with helpful names for me but then, just before I did the PD, I replaced all the names with random Emojis and then randomly sorted the Pages so that they weren't in any kind of "room" order.  I really wanted to reinforce the CYOA metaphor.  And it was funny because one teacher asked the room "How do I get back to Zoom?" and the other teacher shouted back "You have to go through Morph!".
After we were done the three sessions, I went back in to the OneNote and labelled all the pages with the content so that the teachers could use the OneNote as a PD resource without having to engage with the CYOA. 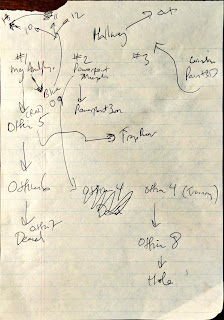 The last five minutes of the session I did make a reminder that throughout the Notebook I had dropped signs (with links) that they should share and reflect on what they learned on our Faculty Teams discussion, and it was good to see at least half of them took the time to do that.  It's helpful to know what they felt was important and that they appreciated the different format.
You are more than welcome to flip through the Notebook here : http://bit.ly/cyoamar25 or you can download it here as a OneNote package: http://bit.ly/cyoamar25download
Obviously, some of the content is specific to my School (the Teams links, for one) but you're welcome to repurpose this as needed.

Things that intrigued me throughout this PD: 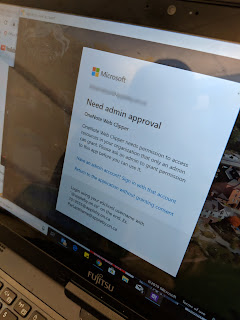