A one-off OneNote Notebook for a specific PD session

July 09, 2014
Each day as part of the 3-week Park City Mathematics Institute (PCMI), we have a 75 minute session called "Reflecting on Practice".  We take the 60-or-so participants and break out into three smaller rooms of about 20 each, further subdividing them into 4 tables.

Each year we look at a teacher move and delve deeply into how and why.  This year's topic is "Discourse" or, more colloquially, "math talk".  In planning these sessions we have an obvious focus on good pedagogy - teachers learn by watching good models.  We are deliberate in our choices of how we have teachers collaborate, how they present their work and how they receive feedback.  Over the three weeks we try to showcase a variety of approaches and technologies.

Today's class asked participants to create a task with their partner that would specifically introduce a common error in the mathematics they taught (we run from Elementary through Secondary) and provide strategies for the teacher to deepen the conversation around the error. 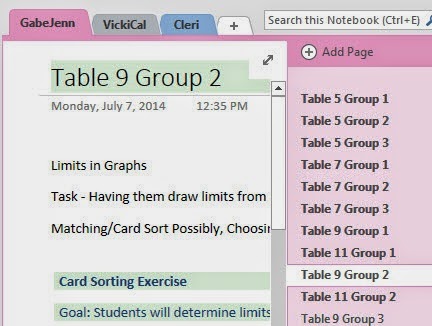 Normally in an activity like this we would have used poster paper so that they could then put their tasks & strategies around the room and do a gallery walk, then bringing out themes and challenges that arise.  But, since we were asking teachers to create tasks for topics they would actually end up working on with students, we knew we wanted to keep and distribute them.  Teachers love to have a reservoir of good questions.

For this, we decided to use a shared OneNote Notebook on my OneDrive that would be visible across all three rooms. I created a Section for each Room (labelled with their facilitators' names) and then three pages for the three groups that may be at each table.  The partners would use a shortened address (I tend to use bit.ly) to get at the Notebook on any device and then put all of their content on their page.

As I mentioned on the earlier post, our participants have worked enough with OneNote now that they are very comfortable with the interface.  They brainstormed together on their devices using text; if they had a pen-based computer they included drawings and a few groups drew on paper and then snapped a picture with their smartphone and pasted the image in.  The facilitators watched as the tasks developed and tagged pages that would later be brought forward to individual rooms for discussion.

The feedback from using OneNote has been great; they have referred to it as an online whiteboard, an electronic notebook.  They have really liked the ability to be physically in one room while being able to see the content from another room - with poster paper, that's pretty much impossible.  They also now have access to the material when they get back to their home schools.

It would be nice that, after sharing an edit-anywhere link the owner of the Notebook could then "lock down" the Notebook after the exercise so that there's a snapshot that can't be changed.  I did download a OneNote package so that should any teacher accidentally remove content I can replace it.

I've use OneNote like this for conference sessions and it works really well to collect user content and feedback but it's usually limited to folks who are familiar with OneNote.  To use it with a group of now-experts has been a rewarding experience.